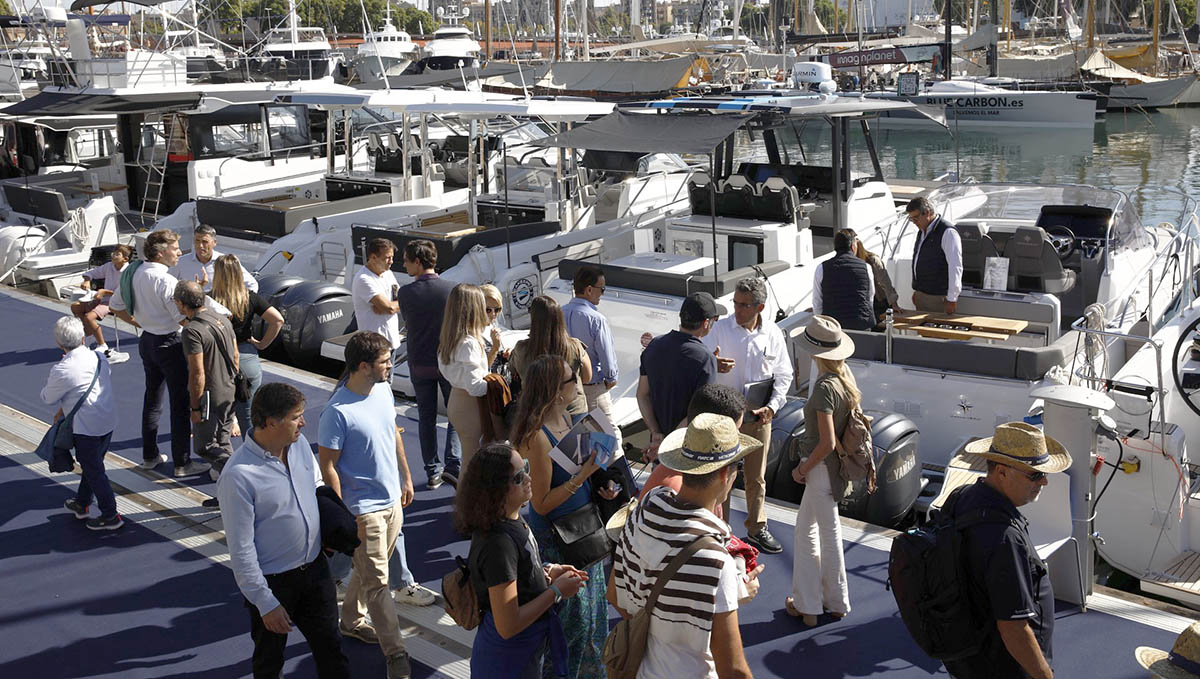 On the last day fo the Barcelona Boat Show we spoke to seven exhibitors to give them the chance to take stock of this year’s event. This is how they assessed the attendancem, the sales and their prospects for the 2023 season.

We’ve received quite a lot of visitors, especially in the mornings. The people were interested in finding out what’s new, getting on the boats and talking to the sales staff. The atmosphere was upbeat, with talk of sailing, boats and engines. There were also good vibes among the professionals.

Last year we were surprised by the number of deals we closed at the show, it was atypical. This year we haven’t detected that rush to make purchases, the general buzz that was apparent wasn’t as favourable for closing sales as it was a year ago.

The challenge for the 2023 season remains shortages, the lack of products. Our efforts are focused on managing the order we’ll have to bring to our work to administer the supply and fulfil our commitments.

This year the attendance at the show has been larger and we’ve had more visitors to our stand. On Wednesday the queues were impressive, I haven’t seen so many for years.

Traditionally we’ve barely closed any sales during the show over the last 15 years. The accessories sector has become a residual part of the show, it’s turning into an event solely for boats. What also affects us is the fact that METS is held a few weeks after Barcelona, and that’s where the accessories season kicks off and all the world’s innovations are on show. We sign a lot of contacts and our first sales drive is in January.

This season looks set to be a good one; 2022 was a spectacular year for us, the best one since we’ve been called Dismarina, and 2021 was also a good year. I think this new year will also be a year of growth.

The attendance has been larger on some days than on others. It’s important for lots of people to come as a sign of interest in the nautical sector, but the most important thing is for the visitors to be people interested in our products.

After the show we’ll draw our conclusions with the data from our distributors; our distributors draw up a lot of contacts and then do follow-up to close sales. Their first impressions depend on their area, as those closest to Barcelona are the ones that attend to the most visitors.

It’s difficult to estimate how the 2023 season will unfold, due to the uncertainty around the world. During the pandemic it was evident how people really appreciated nautical products, that they wanted to go sailing. Let’s hope that the interest will continue this year.

As for the influx of people, the impression is that it’s been the same or better than last year, with people interested in buying boats. We’ve also noticed the grouping of catamarans, which has allowed us to acquire more space and visibility and enabled us to conduct more marketing initiatives.

Our distributors have closed sales, they sold the little stock they had immediately, and we’re sold out for the next few years. We come to the show to enhance our brand image and increase the interest in our boats, because, fortunately, our sales have already been made.

For us, 2023 will be a good season, an excellent season, as all our products have been sold out, as will 2024. Our efforts will now focus on completing our sales in 2025.

I don’t have the access counter, but I do see the people walking past the stand, and there were lots of visitors, especially on Wednesday, which was a public holiday (12th October), and, above all, lots of people stopping at our stand. Our clientèle is quite recurrent, as we not only have customers for new boats but also ones who have a boat and come to buy sails to replace the old ones. We have a fairly steady clientèle that’s loyal to the brand.

We closed deals at the show and, as always, many more will be finalised in the coming weeks.

I’m optimistic about the prospects for 2023, people are eager to sail, they’re still keen to go on cruises and take part in regattas. I think we’ll grow, I expect the turnover to increase by 5%, 10% at most, compared to our sales in 2022.

This year’s show has been the best one in the last three years, after the difficult times the whole of society has gone through. People have moved, travelled and visited the show. People have come closer to the sea, we’ve noticed a change in the profile of the users who’ve visited us and viewed our products.

Our distributors have closed deals, but the lack of materials is conditioning their sales, many of them have already sold all their products.

The prospects for next season are good, the impetus of new people approaching the sea will continue and, with the international context, we’re going through a positive phase. Let’s hope that the nautical sector remains untouched by international events and that the interest in going out to sea is maintained.

We’re a new shipyard and this is our first year at the show, so I can’t compare it with previous events. Our aim was to make ourselves better known and we’re more than satisfied. We’ve noticed variations in the profile on the public holidays and weekdays and I was expecting a few more visitors.

Our expectations were very low as we were new, but we’re really happy with the business we’ve done here. As for the 2023 season, as we have nothing to compare it with, we’re more than satisfied, as the sales we’ve closed will guarantee 30% of the production we’ve planned. This is a result we hadn’t expected to achieve, even in the most optimistic scenarios envisaged on an Excel sheet.