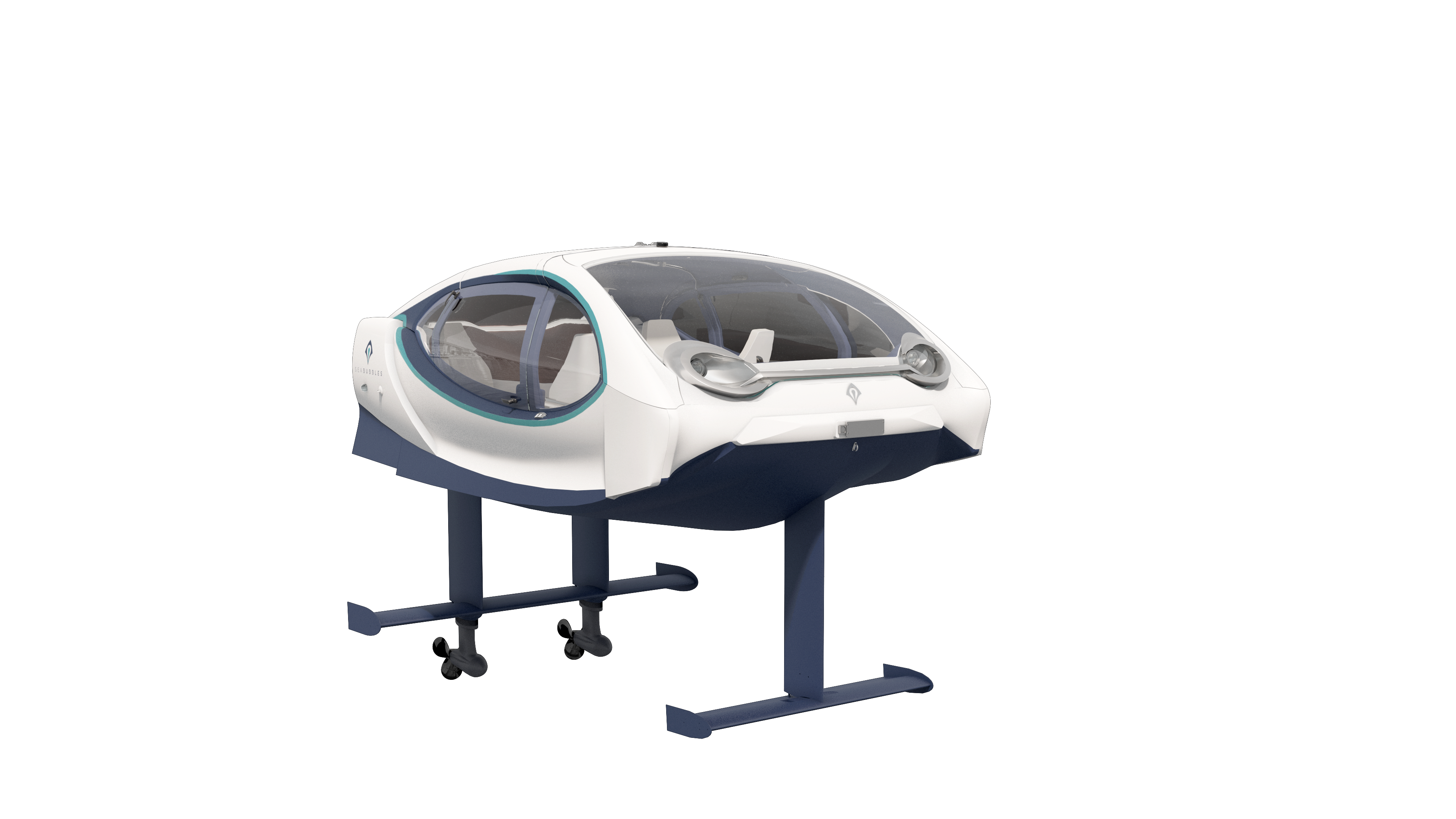 At the latest Barcelona Boat Show Seabubbles and Rebot presented their small electric vessels, two innovative proposals with good sense that we were able to test briefly.

With the appearance of a futuristic car, the Seabubbles, the French brand’s first prototype, floated at the Moll de la Fusta. Under its hull was hidden a system of foils capable of supporting it and enabling it to “fly” powered by an electric engine.

Designed for sailing on lakes and in rivers and very calm waters, it can be used as a taxi, a transfer vehicle for hotels and riverside restaurants and, of course, by individuals attracted by its innovative concept. 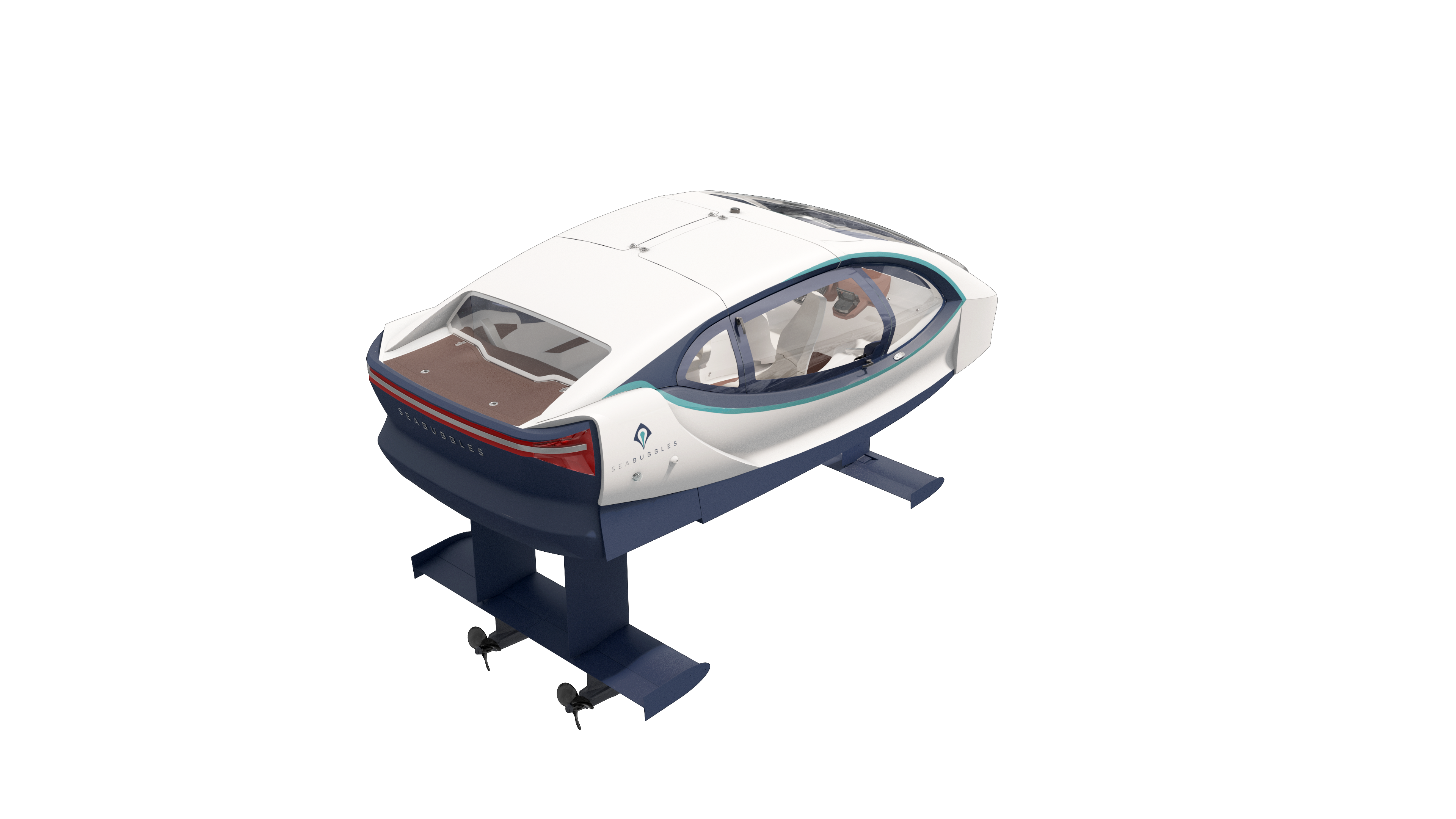 Under the hull, towards the bow, it has a wide foil supported by a daggerboard in the central part forming an inverted T while the foil towards the stern has two daggerboards at whose ends the propellers of its two drivers have been installed.

The Seabubbles is easy to sail at low speed, as we did from its mooring at the Moll de la Fusta to a larger dock in the port of Barcelona. The launch manoeuvre is simple, as it was enough to accelerate, maintain the course with the joystick and wait for the physics and electronics to do the rest. The physics, by enabling it to reach 8 knots and start staying above the water and increasing its speed to 14 knots at full capacity. The electronics, by allowing its control unit to stabilise the boat by means of the rear foil flap. The IMU control unit is informed by two ultrasonic sensors placed on both sides of the bow that measure the height above the water to stabilise the bow/stern squat and the heeling. 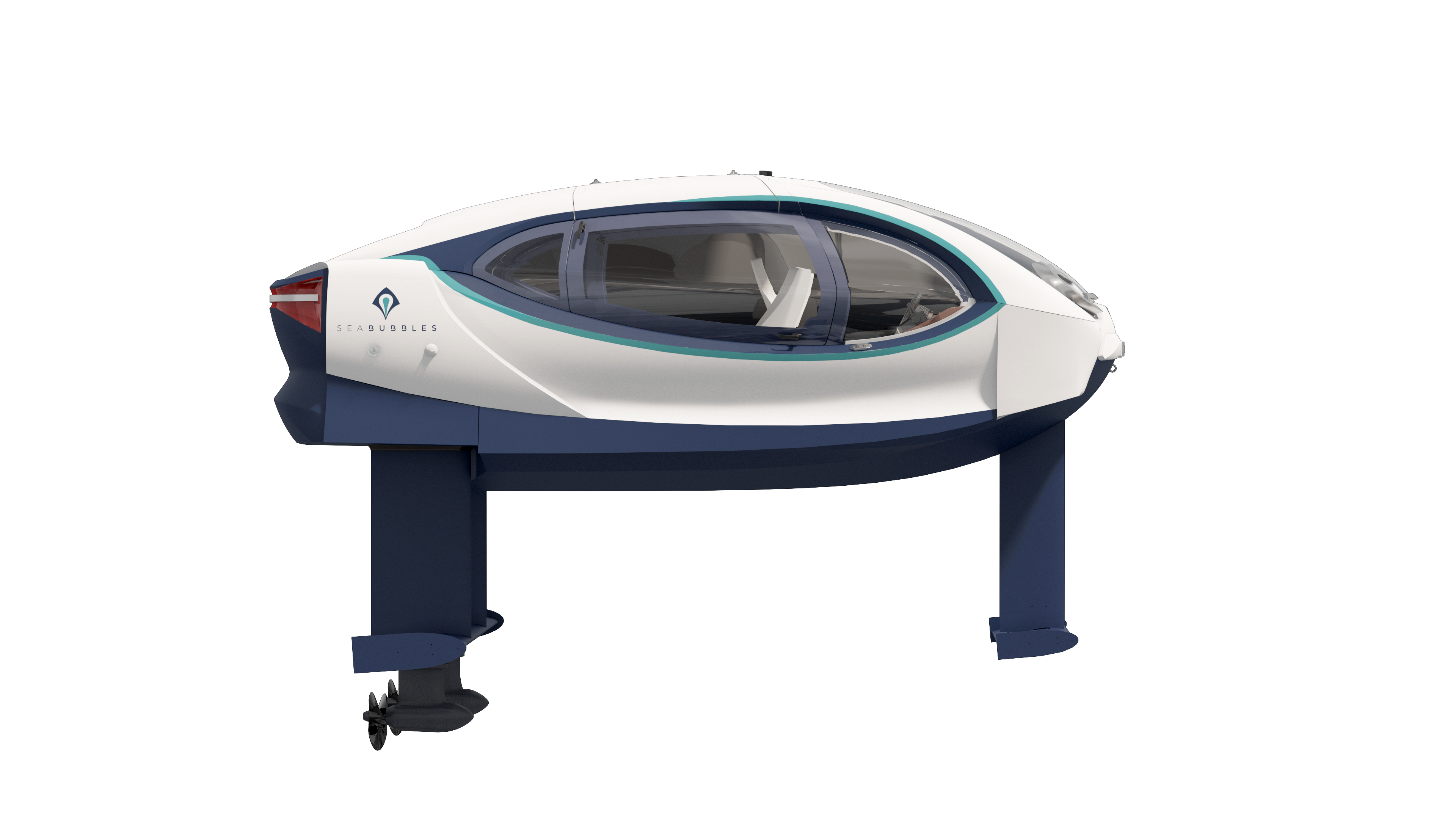 The engines of this “boat” 5 metres in length and with a 2.5 beam are two Torqeedos with 12 kW of unitary power. They’re powered by 35 kW/h batteries at full capacity that are capable of recharging to 50% of their strength within 75 minutes and 90% in about three hours. The interior contains five seats, as well as the steering position with impressive folding side access hatches. 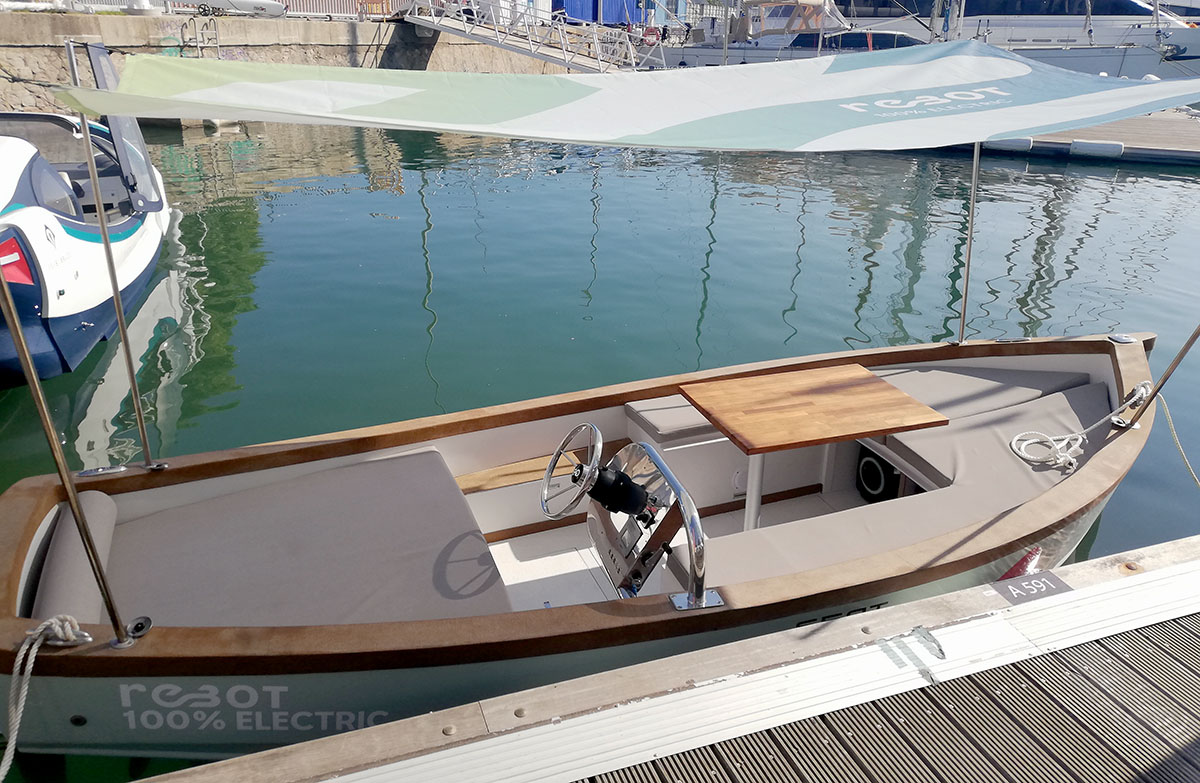 The Rebot, with a more classical and nautical appearance, was also on display. This Menorcan llaut with an electric motor is a project that seeks synergies with the car industry. Not surprisingly, the proposal uses identical Silence batteries as the Mo/Seat and Acciona/Silent electric motorbikes.

The boat, with a maximum length of 5 metres, a 4.6-metre hull and the stern platform, is made of fibre glass and finished off along the entire bulwark and on the bathing platform with specially treated cork. The lines of the hull are based on a traditional llaut built at the beginning of the last century. Its cockpit has an individual steering console on the starboard side and it makes use of the aft sundeck as a seat where two more people can also sit.

At the bow of the console the Rebot has an excellent U-shaped seat capable of seating 4/5 people around its table. A good part of the space under the bench and the sundeck is used for its batteries, while the engine is housed under the central floor of the cockpit. 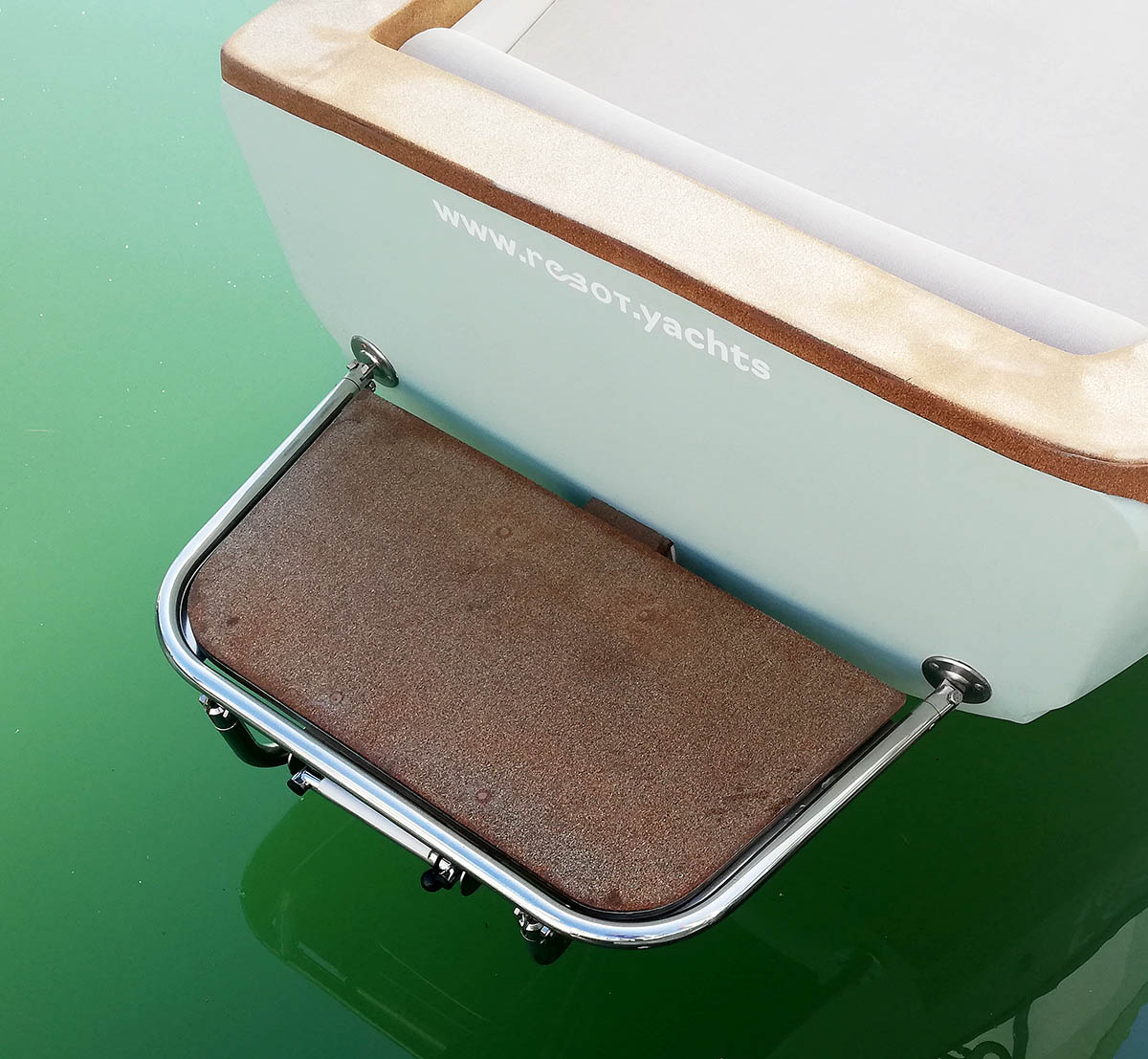 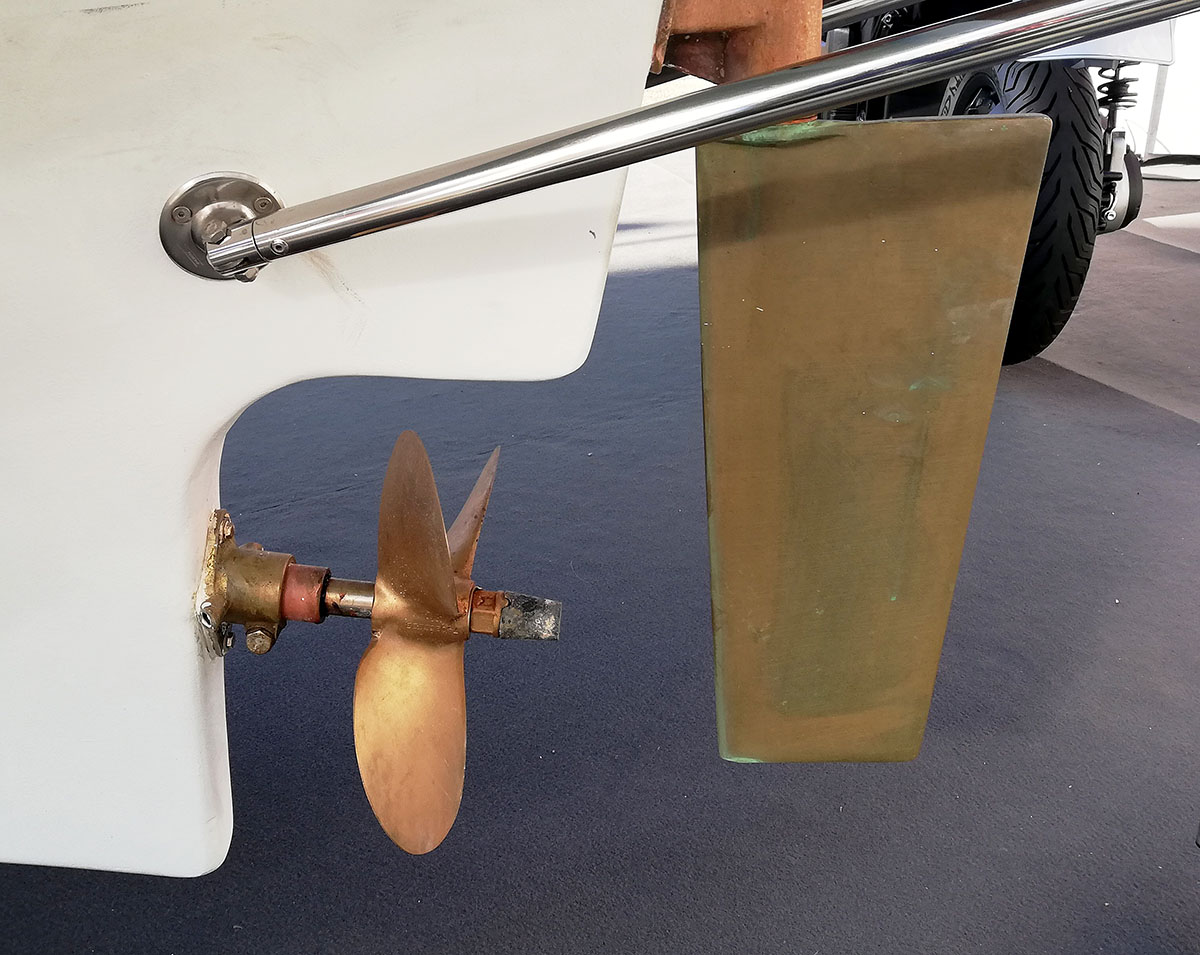 The Rebot’s propulsion is entrusted to a 10 kW EVolt engine equivalent in terms of performance to a fossil fuel engine at around 18/20 HP. The Silence batteries have 5.6 kW of power and come in two combinations. The basic one, with two batteries and autonomy lasting 4 hours and, optionally, another pair of batteries to increase the autonomy to 8 hours of sailing. The 100% recharge time for the four-battery installation is 9 hours.

Securing the hours of sailing, the engine is limited to reaching a maximum speed close to 6 knots. The rudder hangs from the transom below the bathing platform, thus facilitating boarding after a swim with the help of a folding ladder hidden under the platform.