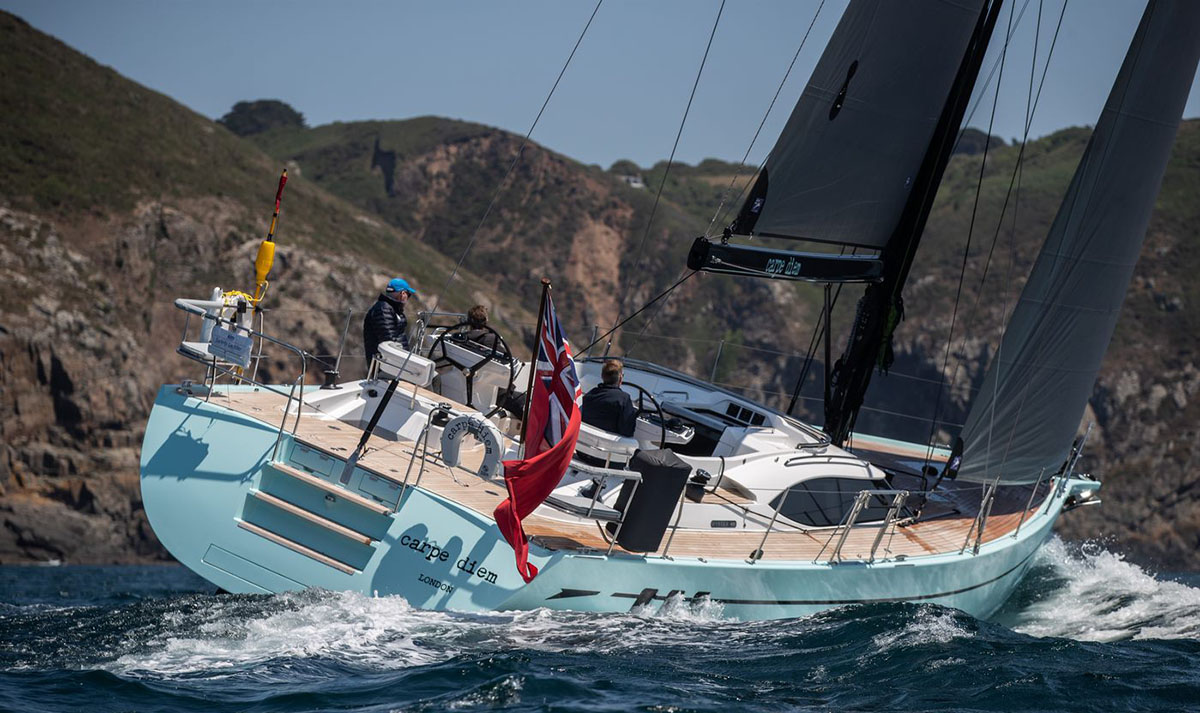 The new 50-footer from the shipyard in the United Kingdom retains its calling as a high-quality boat for ocean sailing, with particular ease of handling for a small crew.

Created in 1973, the Oyster Yachts shipyard specialises in sailing boats that can cross the ocean, with models 56, 67, 74 and 88 feet in length and a range that has been extended by the new 59-footer, which has become the English brand’s youngest model.

The Oyster 495, designed by the renowned Humphreys Yacht Design firm, offers a modern design adapted to the shipyard’s DNA, combining its good sailing performance, high-quality construction and a comfortable life on board. The above facets are reflected in this new model, whose merits have led to become a candidate for the Best European Boat of the Year Award.

The deck, with a central cockpit, has wonderfully clear lines, which, in addition to enhancing the aesthetics, facilitate safer sailing. Lined with teak, moving around is easy in the absence of any obstacles and there’s considerable width, even between the shrouds and the mast. From this point to the bow use can be made of the large space as an occasional sundeck at anchor or when sailing in very calm conditions.

The cockpit has a double wheel and a coaming at a convenient height to support our back when we’re sitting on its two long seats. The aft deck is fully enclosed and the transom has a folding “skin” with steps to climb on board after a dip or embarking from an adjoining structure.

The interior has very broad spaces in the central area of the cabin, which boasts a large lounge. Making partial use of the entrance hatch, a galley with a good layout is included on the port side, while towards the stern on the starboard side there’s a magnificent navigator’s corner, with a large chart table and enough space to stow or install electronic navigation equipment. 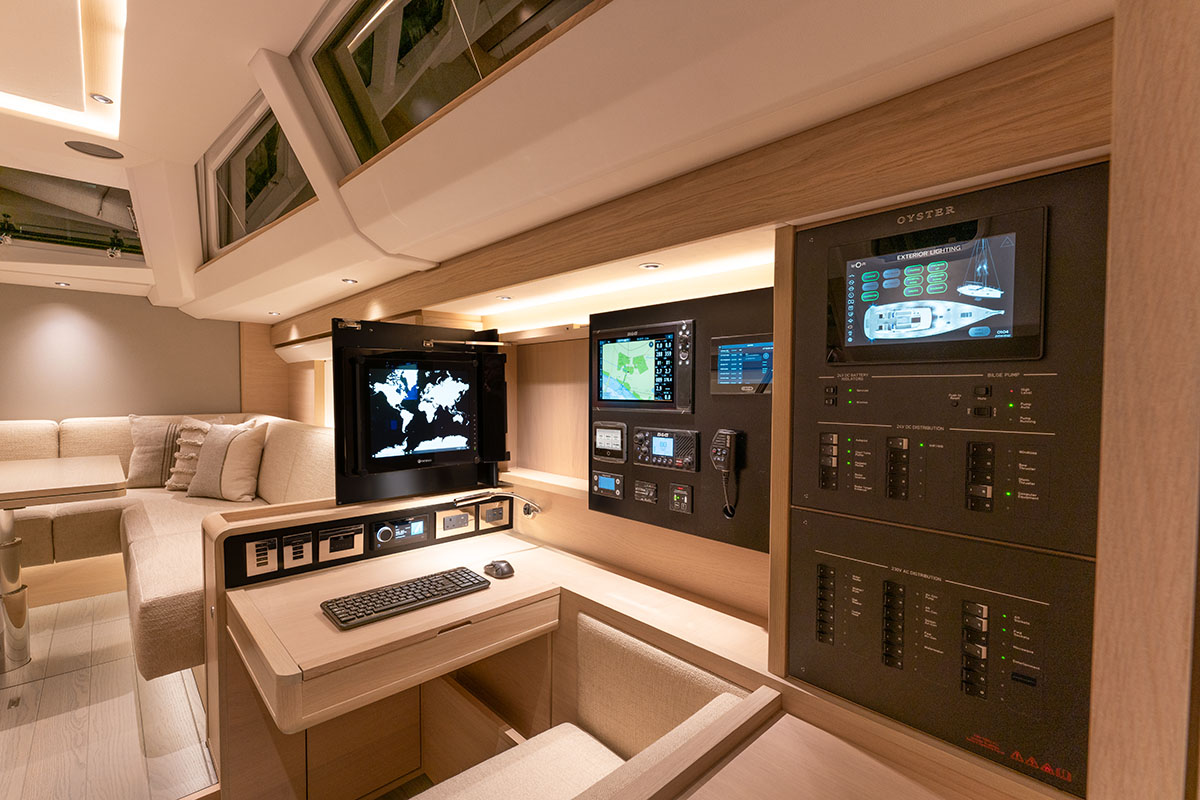 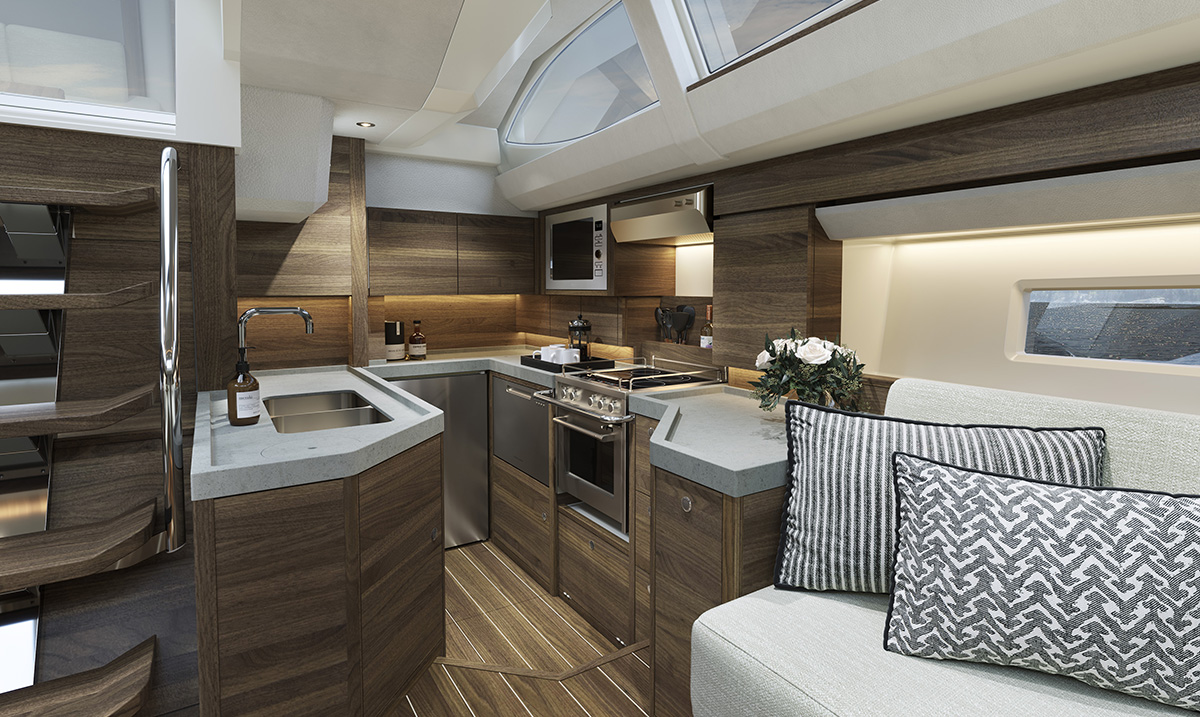 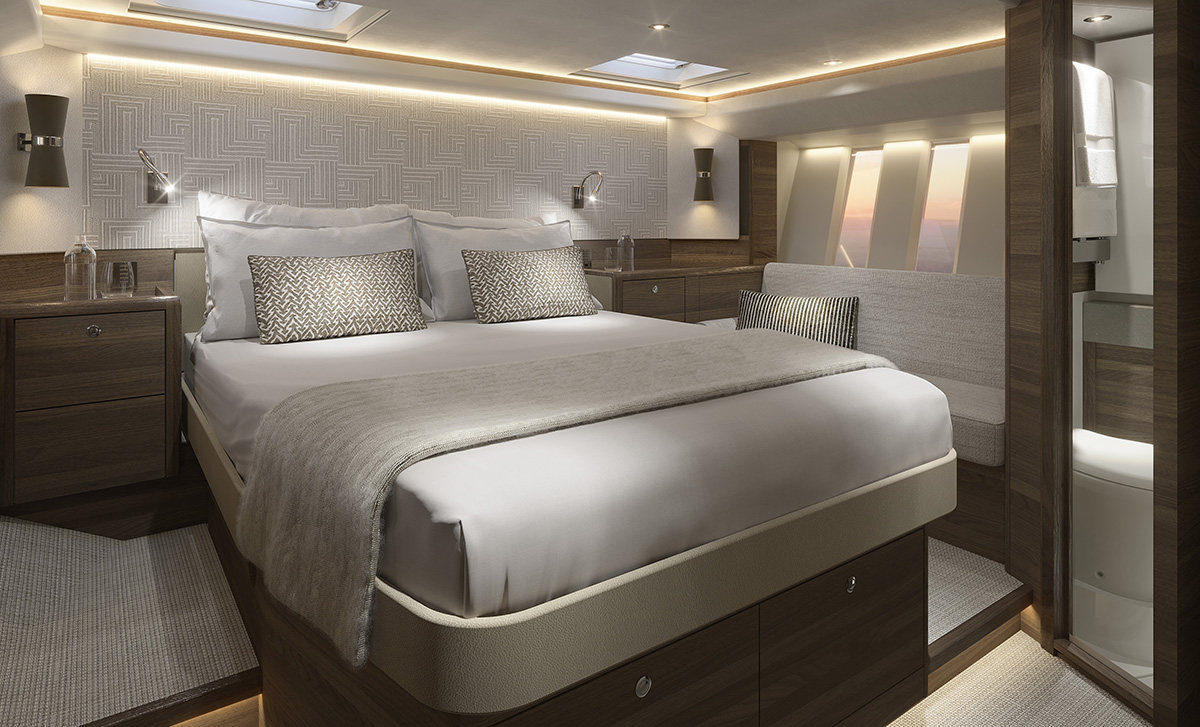 The Oyster 495 comes with three cabins, the one in the aft equipped with a built-in toilet constituting the main one. In the bow, a large triangle in front of the lounge provides a second cabin with a double bed and another one on the starboard side equipped with two single berths, ideal for optimising its width. This third cabin is designed for young single guests or perhaps professional crew members. Opposite it, on the port side, we can find a large toilet, which will serve the two cabins and occasional guests, thus removing the need to use the toilet in the main stern cabin.

Different windows and hatches provide good natural lighting, further amplifying the feeling of spaciousness during the day, which is undoubtedly enhanced by the interior height. We should highlight the excellent accessibility to the engine compartment from the side and front, with enough space to work on the propeller, batteries, generator and any other equipment that may be installed.

Life aboard the Oyster 495 may be comfortable, but the sailing doesn’t lag far behind. True to the proposed family oceanic programme, it isn’t a boat with a large sail area, but it’s extremely easy to manoeuvre. It comes standard with a furling mainsail and jib, forming a system that doesn’t remove the need for a large crew, a condition ratified by the electric sheet and piano winches. 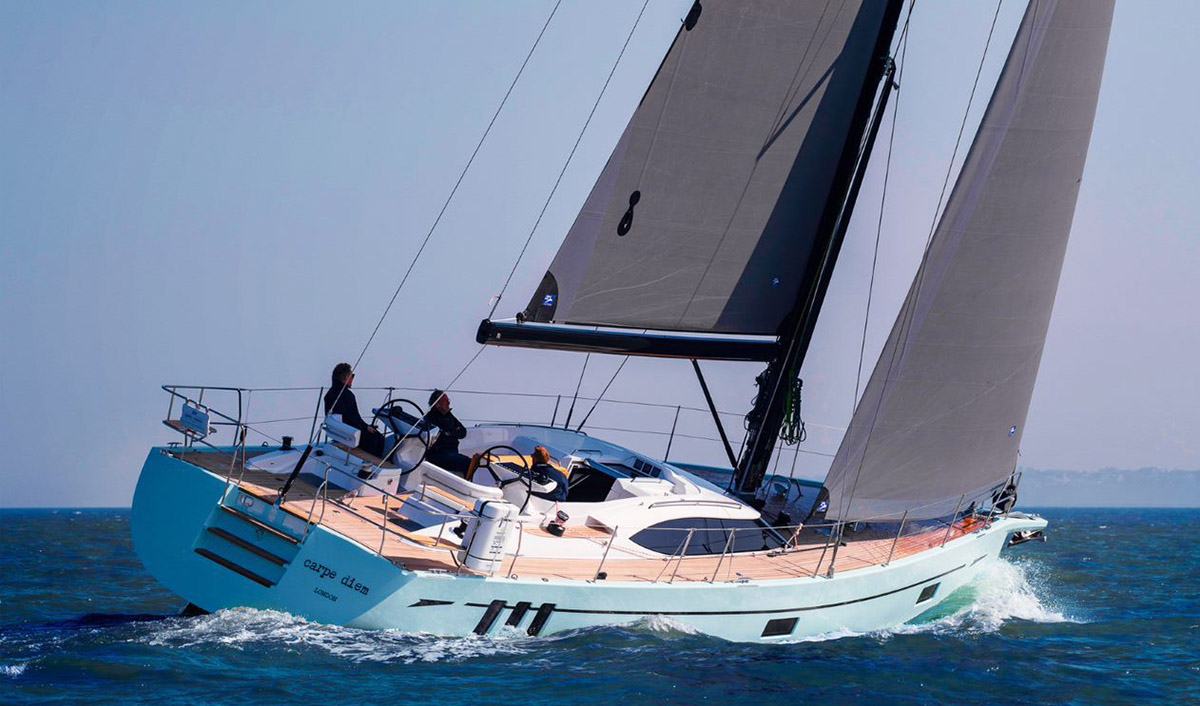 During our trial in Port Ginesta there was barely any wind and it was very irregular and changeable. We began at 4 knots and hoisted a zero code, enabling us to go at over 6 knots when Eolo came alive with gusts of 7 knots blowing. Maintaining an interesting 70-degree angle, it responded to the smooth rudder to perfection with either of the two steering wheels. We soon changed the headsail for the jib to sail upwind back to port. Her performance was impeccable and the tacks with the self-steering system were child’s play. The wind increased 10-11 knots for a few moments, during which the Oyster shook off its lethargy and made us aware of its potential, which undoubtedly begins when the anemometer begins to register 14-15. With the engine at 2,300 rpm and 70% of its full turning angle the boat sailed at 8 knots, and, with a very moderate number of revolutions (2,000), at a little over 7 knots.

The English shipyard excels with its 50-footer family programme proposal, which is easy to manoeuvre, docile at the helm, extremely high-performing and comfortable in every way. Its more Mediterranean use for coves and short voyages doesn’t appear to be incompatible with the Oyster’s more intrinsic oceanic DNA. It’s maybe a good option for signing up for the next Oyster Rally, which will sail 27,000 miles around the world for 16 months, as 25 participants are doing at the current event. 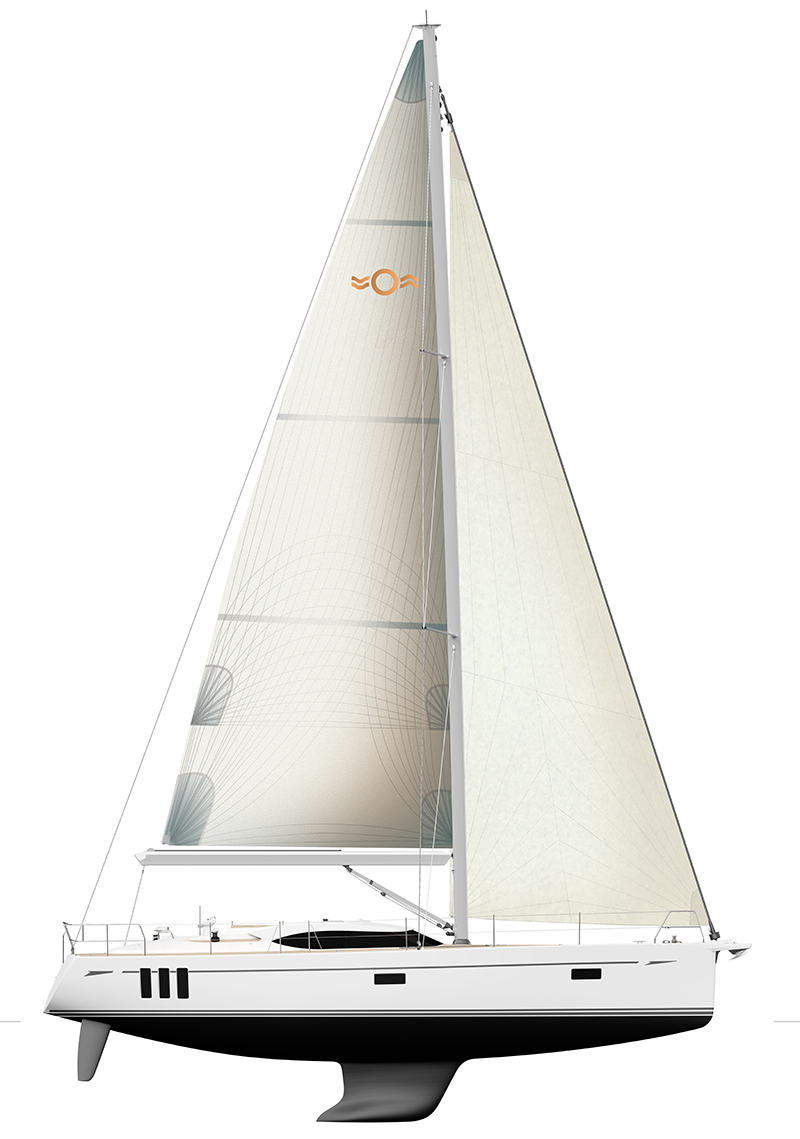