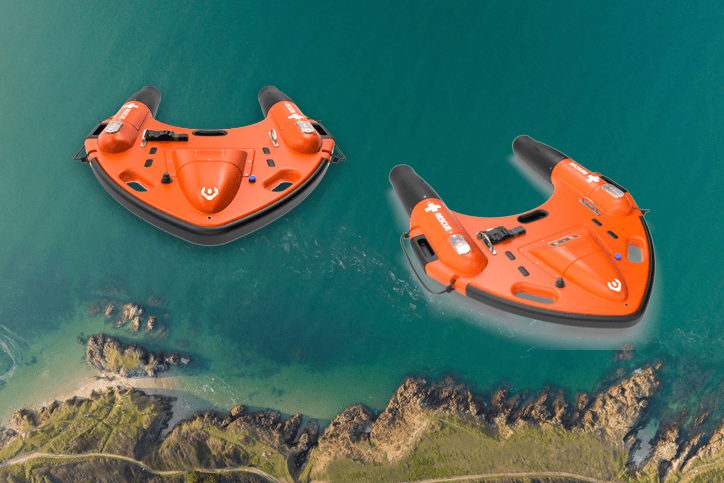 Sometimes, things happen by chance or with a component of unexpected chance. Some of this was involved in the creation of the surface drone for rescue of Proteus Innovations.

After finishing their university studies as industrial engineers, the three friends Miguel Ángel Sánchez (CEO), Jorge Pradas (CTO) and Julio Ferrando (CFO) thought to direct their first professional steps towards the aerial drone sector. Exploring the market, they realized that it would not be an easy task. “We investigated the sector and realized that it is very hackneyed and with increasingly complex legislation. This led us to think about the aquatic sector, where we saw that there was much to be done. Unmanned ships or marine drones have an infinite number of applications, and we had to choose what to focus on,” explains Jorge Pradas.

Residents in Valencia, one afternoon they were walking along the beach when they saw a rescue. “Apparently it was a simple intervention because, although there was a lot of waves, the rescued person was not far from the shore. Lifeguards tried to put a jet ski in the sea, but the waves prevented them. They had to call a helicopter and it took a long time to rescue, when apparently the operation should have been resolved easily and quickly,” says Pradas.

After talking to the lifeguards, their eyes were opened, the spark lighted and the idea of creating a drone for rescue work arose. They spoke to the local assembly of the Red Cross to present their idea, which was very well received. From there, they set out to develop the first prototype, when the pandemic and the first lockdown emerged, which made things difficult for them. However, Julio Ferrando was able to manufacture the first prototype in a workshop in Villarrobledo (Albacete), his hometown where he moved to during the confinement. He built it in fiberglass without molds, and although it had a rough appearance, it allowed them to validate the idea, show it and improve it.

“In September 2000 we founded the company Proteus Innovations and opened an investment round that we closed in March 2021. With these resources we have been able to carry out all the development of the production, and happily, it has already gone on sale, “says Prados.

The ideas and advice of lifeguards, the Red Cross itself and ship captains helped them to optimize the prototype, attending to the real needs that a good surface drone needed for rescue work.

This marine drone has a double piloting system: remotely by radio control or manually by a lifeguard, when the rescued person is injured or unconscious.

The Nàutic project, which was baptized as such, won the third edition of the Nautic Tech International Investment Forum, a start-up competition organized by the Salón Náutico de Barcelona to promote and reward innovation in our sector.