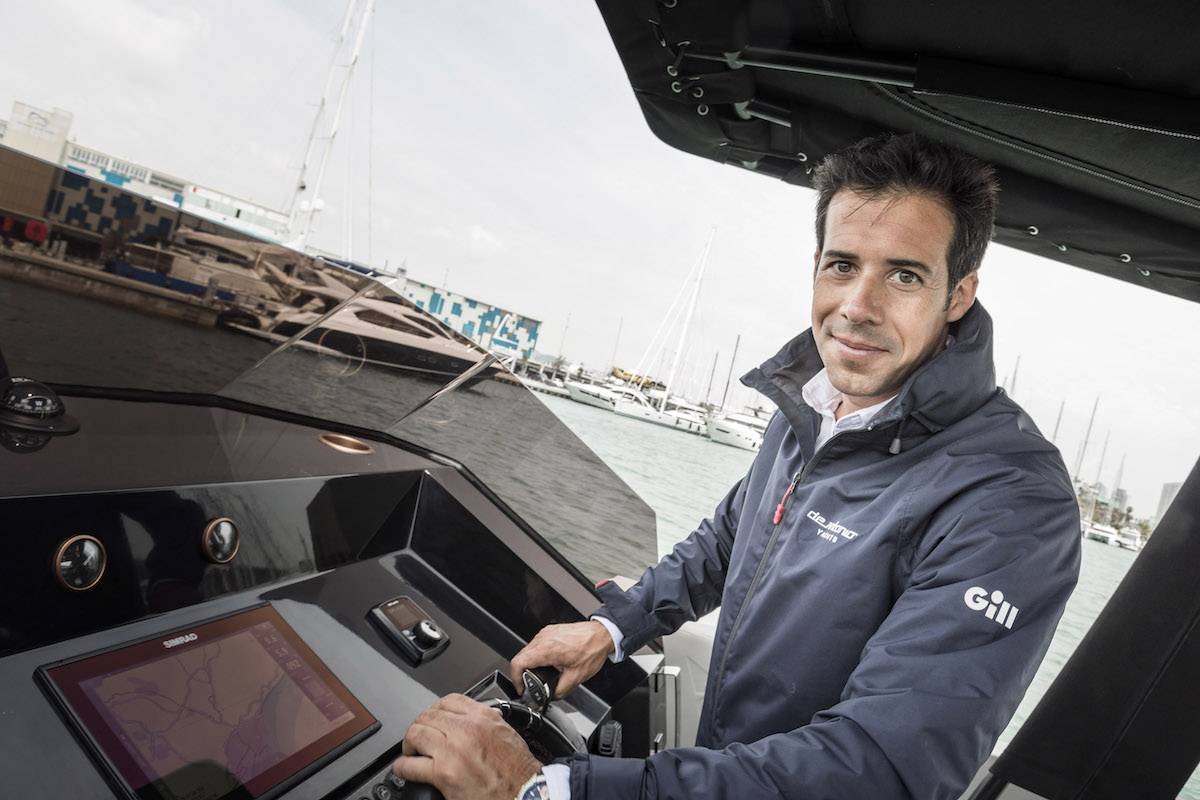 Marc de Antonio and his partner Stanislas Chmielewski founded De Antonio Yachts ten years ago. After a cautious start, the company’s become one of the flagships of the Spanish sector and a benchmark for success, enhanced by its good health and its ten models ranging from 28 to 50 feet in length.

We recently interviewed him during our sister Gente de Mar podcast and we summarise some of the main topics we discussed below.

On creation and its origins

“It wasn’t an unconscious exercise, but it was an innocent one, due to our age and lack of knowledge at the time. I was 28 then and my partner Stan was 25, and we never envisaged getting to where we are now. It was difficult to start a project from scratch with very little investment or professional experience in the sector, but we undertook it with lots of enthusiasm and hope.

I believed there wasn’t a boat that met a certain set of characteristics; we detected a niche in which we might be able to sell some units. Our philosophy was a boat with a concealed outboard motor that was easy to maintain, and this turned out to be a more successful idea than we imagined. Circumstances have led all the brands to move in the direction of outboards. We also wanted to incorporate a more contemporary design, in keeping with the latest trends in architecture and the industry, without neglecting the owner’s comfort”.

On the recent Cannes Boat Show and the new D36 model, nominated for the Best European Boat of the Year Award.

“Cannes is one of the three most important shows that we attend, together with Miami and Dusseldorf. It’s a great indicator at the start of the season and this year the outlook wasn’t very optimistic, due to the war in Ukraine. We were looking forward to the Cannes event and we were impressed. Lots of international visitors attended, many of whom were eager to buy, and we closed some sales during the show. We presented the new D36, an evolution of the 34-footer that’s been nominated for the Best European Boat of the Year Award. We’ve received this award four times in the last five years”.

The importance of the Barcelona Boat Show

“In a few days’ time we’ll also present the new D36 at the Barcelona Boat Show. This year’s show, the 60th, looks really good and its director, Josep Antoni Llopart, recently explained the work he’s doing to put it back at the forefront of international shows. I think they’ve made significant progress this year, with a high number of brands and exhibitors and excellent expectations for the future. This is something that’s really important for the entire Spanish nautical sector”.

To increase the number of units manufactured, with the prospect of having its production over the next two years almost sold out

“We have the capacity to expand our production; the actions we take today will have an impact in twelve months’ time. After ten years we’re less impulsive and we measure the risks much more, we have several channels open to us to increase production. In the short term we have an agreement with Lema Boats to produce the new D36, with an important target of 60 units in about 24 months. In addition, we’ve reached an agreement with the Polish shipyard to expand the facilities we’re producing at. We’re also evaluating the option of duplicating moulds to build ships in South America and the United States so as to be closer to these markets and diversify the production risks”.

On the potential production of sailing ships

“I’d love to, it’s my personal dream because I come from the world of sailing. I’ve thought about it many times, I’ve even got some sketches that I’ve started. But it certainly won’t be in the short term, for the time being we’re operating on lots of fronts and we have to consolidate our motorised range. I’m always joking with my partner, threatening him with building my own sailing boat, even if we don’t market it”.

The shift towards electric boats

“We went into partnership with Cupra, starting with the 28-footer, and now we’ll launch a hybrid proposal with longer lengths, combining electric outboards and a petrol one. The batteries can be recharged at the electric socket at the mooring, allowing sailing for an hour at six knots, which can sometimes prove really useful when it comes to moving to a nearby anchorage. In turn, electric outboard manufacturers are continuing to work on developing new models with greater power. This will enable us to take a step forward in our proposals for hybrid and fully electric boats. I think they still need a bit more development to meet the needs of nautical users. I believe things will have changed a lot in two to three years’ time”.

“Next January, the De Antonio Yacht Club, a project running in parallel to the shipyard itself, will begin operating, providing the possibility of sailing our boats without owning them by paying an annual fee. We’re finalising a series of international bases in highly attractive destinations such as Miami, Dubai, Barcelona, Ibiza and so on. There are really obvious examples in other sectors, we’ve experienced the scooter phenomenon in Barcelona at first hand. We’re keen to try it out with boats, and we’re confident that the proposal will be successful in the mid to long term”.