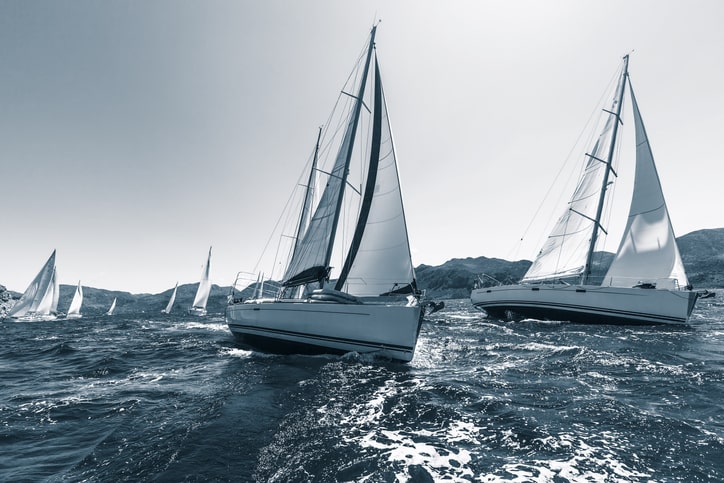 It was the year 1851 when the first edition was celebrated on the Isle of Wight in England. Arriving from the United States, the union headed by John Cox Stevens beat with its America a large fleet of 15 British ships.

After selling their boat, the shipowners’ union donated the trophy to the New York Yacht Club through the Deed Of Gift of the America’s Cup, specifying that it will be held in trust as a perpetual challenge trophy to promote friendly competition among nations.

It was not until 1870 that the British James Lloyd Ashurys, railroad tycoon, presented the first challenge to the American club, which after being defeated, repeated its attempt in 1871, in a challenge to the best of 7 tests, which lost again 4-1.

A series of unsuccessful Canadian and British challenges followed, until in 1899 the era of the intrepid Irish businessman Sir Thomas Lipton began, who launched five consecutive challenges between 1899 and 1920 with the mythical saga of his five ships Shamrock.

In 1930 the headquarters of the regatta was moved from New York to Newport and the boat was regulated to the mythical J Class, which could only compete three editions due to World War II. There was a long break, until in 1958 the modern era of the America’s Cup began. The boat became the International 12 Meter Class of smaller size and more affordable, promoting the proliferation of participants, both American defenders and foreign challengers, thanks to the fact that in the 1970 edition the NYYC decided to create a qualifying series for the Challengers. Among them, the Australian Alan Bond, who unsuccessfully launched three consecutive challenges (1974 – 1977 – 1980), until the fourth was defeated, and for the first time, the United States lost the America’s Cup in 1983, when it won 3-4 with its controversial Australia II of revolutionary winged keel to the defender Liberty skippered by Dennis Conner. In that edition Louis Vuitton began to sponsor the qualifying series of the aspirants.

After winning the series among the 13 aspirants, Conner regained the Cup in 1987 with his legendary Stars & Stripes, played in the Australian waters of Fremantle, against the Australian defender Kookaburra III. This time it was the New Zealand union Kiwi Magic who revolutionized technologically with a ship fiberglass-built ship.

Anticipating that Conner would publish the Protocol of his new defense, the New Zealand banker Michael Fay caught him by surprise by throwing a challenge, which after litigation in the courts of New York was disputed under the Deed of Gift in 1988. Conner assembled a 40-foot catamaran with a wing sail to take on Fay’s gigantic 72-foot-long monohull at the time, which had no chance of beating the North American multihull.

In 1992 a new golden age began in San Diego with the arrival of the IACC rule, and for the first time, the challenger who played the final match was not from an English-speaking country, thanks to the good work of the Italian Moro di Venezia armed by the sadly disappeared tycoon Raul Gardini. In the next edition of 1995, Russell Coutts begins the victorious path of Team New Zealand organized by Peter Blake, defeating with his Black Magic Dennis Conner, who for the final changed his Stars & Stripes used in the qualification of the defenders for the fastest American Young.

In 2000, TNZ defended in Auckland the desired Cup with success against the Italian Prada, in the first edition of history without an American team in the grand finale. And in 2003, the Swiss Bertarelli broke the pact by signing up for his Alinghi the 5 key crew members of the New Zealand team and part of its technical team, architects of the last two victories of TNZ. They took over the Swiss residence and defeated their New Zealand “compatriots”, in the midst of great controversies and tensions, as they were considered traitorous mercenaries in their own country.

Valencia 2007 was the return of the America’s Cup to Europe, and the first edition that was played in waters other than the country of the Defender, as Switzerland lacked waters in the open sea. Alinghi beat Team New Zealand in a final round, without Russell Coutts on board after economic disagreements with Bertarelli. The Spanish Challenge was nominated as a Challenger of The Record, but by registering it under a “ghost” yacht club allowed Larry Ellison to challenge it in the New York courts and challenged the Swiss team under the Deed of Gift.
Ellison, who signed for Russell Coutts after concluding his contract with Alinghi, put together an impressive trimaran equipped with a wing sail that left the smaller and lighter catamaran Alinghi without options in 2010.
In San Francisco 2013 a new technological chapter of the America’s Cup was written, when it was disputed with 72-foot catamarans equipped with wing sails and foils. Team New Zealand surprised their rivals with a boat capable of flying easily in the tights and took a resounding lead in the final with a partial score of 1-8, but the defender Oracle culminated a historic feat by beating eight races in a row to win 9-8 to the New Zealanders. Ellison took the defense to Bermuda in 2017, where flying catamarans competed again, although this time suddenly reducing their length to 50 feet, which upset the Italian team Luna Rossa and abandoned his challenge. Again, Team New Zealand surprised its rivals by incorporating a pedal winch drive system, being able to generate more power than with theadditional manual pedestals, which contributed to their crushing 1-8 victory against Ellison’s team.

The last edition played in Auckland was a challenge for the CEO of the TNZ team Grant Dalton, who had to avoid at all costs repeating a humiliating defeat in its waters as ithappened in 2003. Again the final did not have an American team, being the opportunity to beat the defender for the Italian Luna Rossa, who despite a good start could do little to compete against a faster opponent.